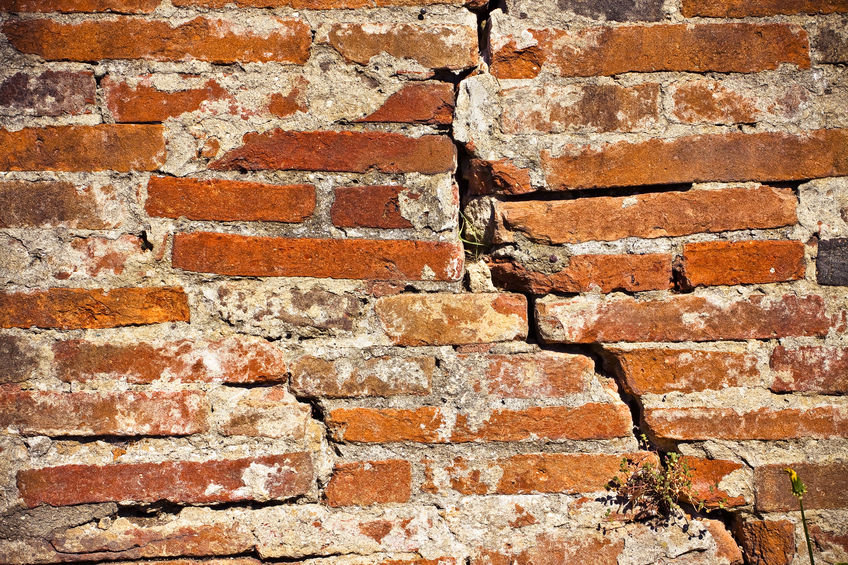 CRACKING: IS MY HOUSE ABOUT TO FALL DOWN?

You’re sure it wasn’t there when you looked yesterday! Something must have happened during the night and now a long, spidery vein is inching its way across the dining room wall. It seems to be spreading even as you stare at it! So what does it mean and how can it be fixed? Is the house about to fall down?

First of all, don’t panic! A crack, while unsightly, does not generally indicate a major structural problem and in most cases, requires only cosmetic attention. And fortunately, there are a number of basic remedies you can adopt. To assess the most appropriate solution, it’s useful to understand what you are dealing with and this article is intended to outline some of the more common problems we find here in Australia.

It would help too to engage the services of a property inspector or structural engineer, as they can ascertain the cause and extent of the problem and give you some professional advice on the next steps to take.

So What Causes Cracking?

Movement in a building or in paving can occur as a result of a number of factors. These can include ground movement and changing conditions in the environment, ageing of the building, poor structural design or substandard workmanship. Basically, when movement occurs, a rigid building is not flexible enough to bend without fracturing.

So let’s look at some of the main causes in more detail.

The foundations of your house are the actual soil and rock material on which your house is built, i.e. not the house structure itself. Foundations can be affected by changes in temperature, moisture and loads from the structure above.

The foundations consist of either ‘reactive’ or ‘non-reactive’ material. Reactive soils are the clay soils and black earth which are known as ‘plastic’ because they shrink or swell according to the level of moisture content. Non-reactive soils are sands, silt and gravel. These materials don’t suffer moisture changes but can be more susceptible to load-bearing failure.

Up to about 90% of all cracking in houses is due to changing water content in reactive soils and subsequent ground movement. A few of the main culprits for this include:

Trees and Shrubs
The fine root systems of trees and shrubs draw on the moisture in the foundations and cause the soil to shrink and settle. This, in turn, creates movement in the house structure and subsequent cracks in the masonry or brickwork.

As a rule of thumb, a typical tree will spread for a horizontal distance equal to its vertical height. Where there are a row of trees, the distance is 1.5 x the height. The amount of water drawn from the soil is therefore quite considerable. Conversely, when you remove established trees and shrubs, the foundation soil will reabsorb lost moisture and start to expand, and this again creates movement.

Climate
Long dry summers and cold wet winters create ‘saucer’ effects in the foundations. Australia suffered through nearly 10 years of continuous drought, with the result that the earth had been parched, with little opportunity to restore its moisture balance. This has been exacerbated by the sudden change to cold wet weather and the soil now being continually wet.

Saucer effects in the foundations can cause external walls of a building to rotate inwards at the top, internal walls can develop cracks, and floors become spongy as the sub-floor structures sink below the supporting bearers.

Surface Run-off
The run-off from raised street and footpath levels, stormwater, or blocked and leaking downpipes can cause washout of the soil or foundation saturation.

Garden Sprinkler Systems
Excessive wetting of the soil by garden sprinkler systems close to external walls can cause problems. So too can blocked or leaking downpipes and stormwater drains.

Uneven Settlement
This is usually a problem associated with relatively new buildings, where cracking has occurred because of differential movement of foundations and stress on the building. It can also be as a result of building on filled ground, where compaction of the fill has not been adequate, or building on variable foundations, such as those composed partly of clay and partly of rock.

A classic example too is when a new extension is added and the new addition has settled with soil consolidation, causing cracks to form between sections of a building.

Excessive Vibration
Vibration damage, such as that caused by earthquakes, heavy traffic, or from significant earthworks can cause foundations to move if the vibration is severe enough. Cracking would occur as a result and show up irregularly in the building structure.

2. Ageing of the Building

All buildings settle when they are first constructed but this shouldn’t have a significant effect on the building itself, provided the footing/slab design has been adequate. However, if the bracing and support in the formwork during slab construction is insufficient, it can result in movement while the concrete is green, and for cracking to occur.

As buildings age and adjust to environmental conditions, there will naturally be some shrinkage and warping which can cause cracks in plasterboard and minor crazing. Cracking in solid plaster is commonly associated with movement of backing material, which will cause the loss of adhesion. This loss of adhesion, or ‘drumminess’, is generally caused by the use of incompatible coatings with different shrinkage rates and is the most common problem in old plaster work.

3. Poor Structural Design or Workmanship
Unfortunately, poor design or workmanship can play its part too in what they call ‘deformation’ of the building. Where overloading occurs beyond the design capacity of a building for example, or where there is inadequate support structures in the roof or walls, or if there is excessive cutting or removal of wall framing for the installation of services, distortion and movement will occur in the building and lead to sagging and cracking.

Cracking can also occur in concrete paving and driveways, where the builder did not make allowances for shrinkage or general movement of the concrete, or used defective finishing techniques such as excessive trowelling.

So what does the Crack look like and how can it be fixed?

The form and size of the crack can sometimes indicate the underlying problem. Cracking can be horizontal, vertical, stepped, cogged or a combination of all these.

As to resolving the problem of cracking, there can only be two approaches: preventing the problem from occurring in the first place or dealing with the cracking once it’s happened.

For prevention, there are a number of strategies that can be considered during the building process. For example, in seaside areas where there is sandy soil and a sloping site, it is smarter to build with suspended timber floors rather than on a concrete slab.

Remember too that bricks are a clay product and have a natural tendency to expand. Expansion joints are therefore necessary to prevent cracking, bowing and arching.

Ground drainage, and surface and subsoil water flows should be controlled, with pipes rerouted away from the building where possible. Careful positioning of trees and consideration of watering systems are essential to prevent changes in soil moisture content.

Once a wall is cracked, it can be difficult to prevent recurrent cracking at the same location. Cracks can either be repaired and allowed to re-crack (to a lesser extent) or filled with flexible sealants to allow for minor movement. Replacing bricks, rebuilding sections of walls or installing articulation joints can also help to control movement.

Considered the most dramatic remedy for cracking, underpinning involves replacing the footings of the building with either concrete, masonry or piles to carry the load of the building down to a more stable level. This is expensive and we would recommend that house-owners seek a professional opinion before committing to this path.

By now, you will be wondering how a building can possibly withstand all these pressures and survive unscathed. But as with any building project, there are myriad factors to consider from the climate and environment through to materials and workmanship. Major structural failures are rare and for the most part, buildings can sustain a great deal of wear and tear.